Sixty years ago, the major powers stacked up their opposing might, setting up the dominoes which would eventually tumble.

Canada, trimming our military capability from the conclusion of WWII which saw our nation build up the 3rd largest navy and 4th largest air force in the world, saw its foreign policy shift towards diplomacy rather than military solutions, and eventually led to us leading the world in UN peacekeeping.

However, Canada was also busy at work designing and building the most advanced and cutting-edge aircraft of its kind, the Avro Arrow Interceptor along with the Orenda Iroquois engine, and weapons and support systems.

The Avro Arrow, long a controversial note in our history, was making both our allies and enemies nervous. The demise of the Arrow came under pressure from the United States to allow nuclear-tipped missiles on Canadian soil, soaring production costs, and the wary eyes of Cold War adversary the Soviet Union.

Ordered halted and destroyed by the Conservative government led by Prime Minister John Diefenbaker, 15,000 direct and 200,000 support employees were fired. Many of the most brilliant Avro Arrow engineers went to NASA and directly contributed to humanity setting foot on the moon.

The Arrow program, in a few short years, demonstrated Canada’s capability to rise to the elite level of aerospace excellence. Technological advances from the Arrow program were unmatched by successive supersonic fighters for at least 50 years.

Edmonton based professional designer and artist Joe Green has made it his mission to commemorate Canada’s aviation achievements.

Green has begun minting coins which tell the story and the history of the Royal Canadian Air Force, the men and women who served, aircraft flown, battles, honours earned and history made. 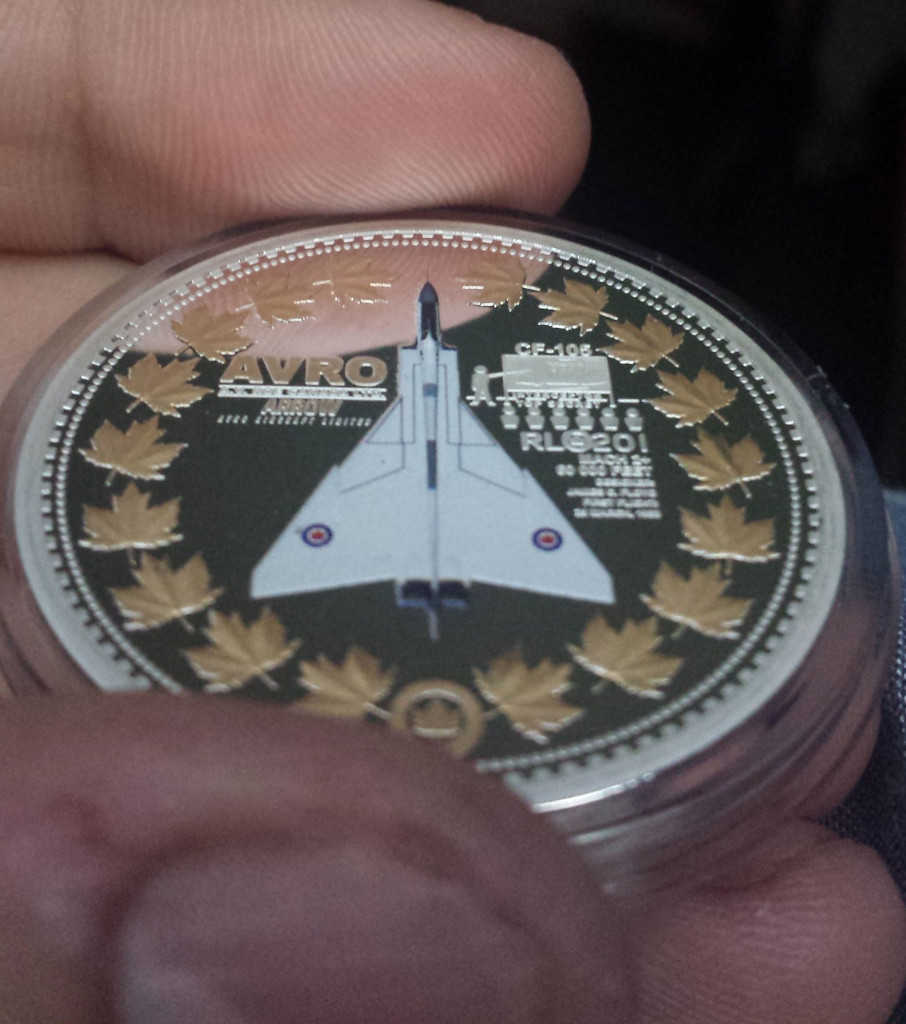 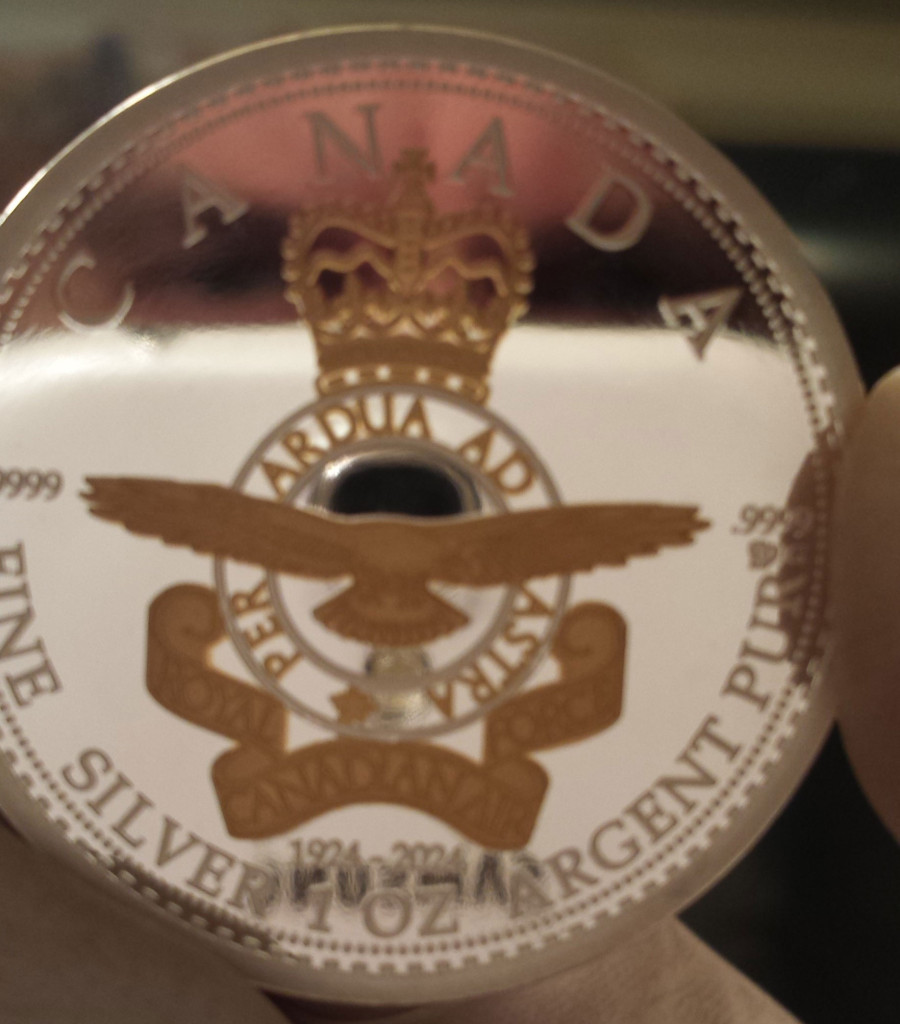 A supporter of Green’s UAV (unmanned aerial vehicle) work contacted him about a coin design competition which featured a Canadian theme. That lead to a design dedicated to the Avro Arrow and so began his quest to create something that honours the legacy of Canada’s best-known but never-used aircraft.

“I felt that the Arrow needed to be done and given my work on the Super Arrow, to model up a coin dedicated to her mom was appropriate.” So rather than entering the coin competition, he decided to do it himself.

“This first coin is a tribute to those who designed and built the Avro Arrow, the Royal Canadian Air Force and Canadian Armed Forces as a whole and dedicated to those incredibly brave men and women who have served, those serving and those who will serve in the future. These coins must live up to the elite standards the Canadian Forces are well known for or I won’t authorize them,” Green says.

Green is creating the coins through his Beaverworks Mint, of which he is President and Chief Designer. The coins are one Troy Oz. of fine silver with select gold plate and full-colour printing which are being produced under sub-license with the permission of the Royal Canadian Air Force Association.

Green is one of the few individuals legally authorized in Canada to reproduce the protected markings of the Royal Canadian Air Force which bear the crown of Her Majesty Queen Elizabeth II. “As I was modeling the crown of Her Majesty, I felt the heavy obligation of duty, honour, integrity and the standards Her Majesty’s crown represents. I was truly humbled and honoured to handle these symbols. I just hope Canadians approve.” Green said. 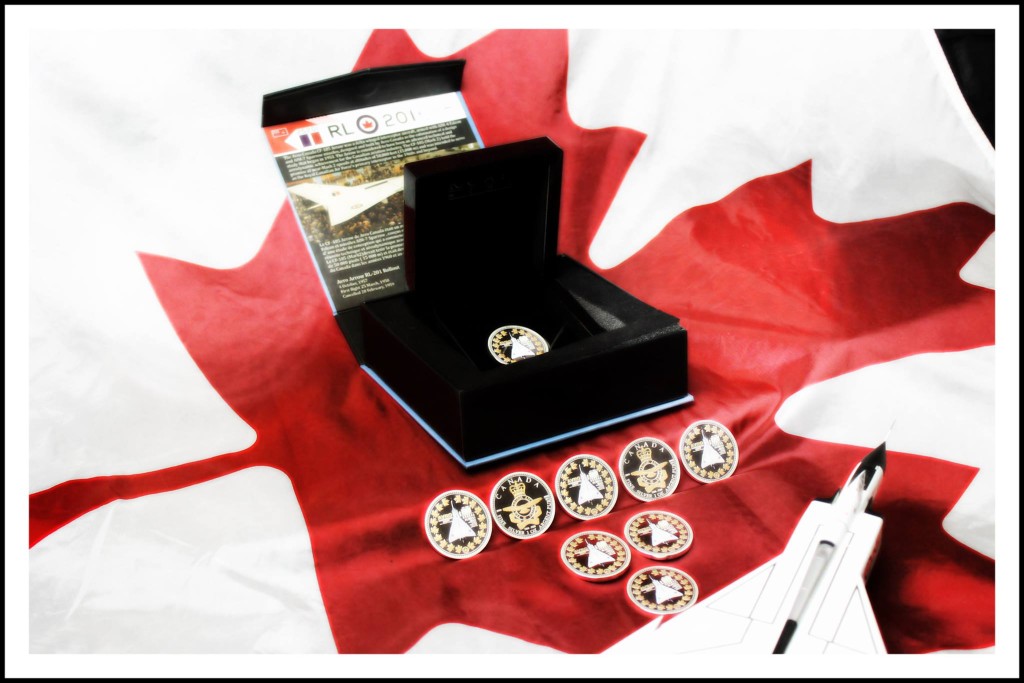 The Avro Arrow coin is only the start. Green wants to mint ‘The 100 Collection,’ which will consist of 100 different coins marking RCAF achievements. His aim is to make up to 12 coins per year leading up to the 100th anniversary of the formation of the RCAF in 2024. The next coins he plans to produce will be the famous Silver Dart, the first aircraft flown in the British Empire in Baddeck, Nova Scotia by J.A.D McCurdy in 1909, the Supermarine Spitfire and Hawker Hurricane for the Battle of Britain, and the Avro Lancaster bomber and the CF-188 Hornet.

The first coins are dedicated to Arrow RL 201, with design elements reflecting the aircraft number. “I wanted to make sure this particular aircraft was honoured along with the 100th anniversary of the RCAF. On the coin faces, there are 100 tiny squares to represent the 100th anniversary and 201 tiny circles to represent RL-201, along with imagery from the flight manual of the Avro Arrow. I hope I added to the legacy of the Arrow and what she came to represent.” Green said.

Green is an Honourary Member of Princess Patricia’s Canadian Light Infantry. “For me, being an Honourary Patricia means adhering to the elite standards of honour Patricia’s represent. In everything I do, I always have that front and centre and I will neither break nor yield in that,” Green said. 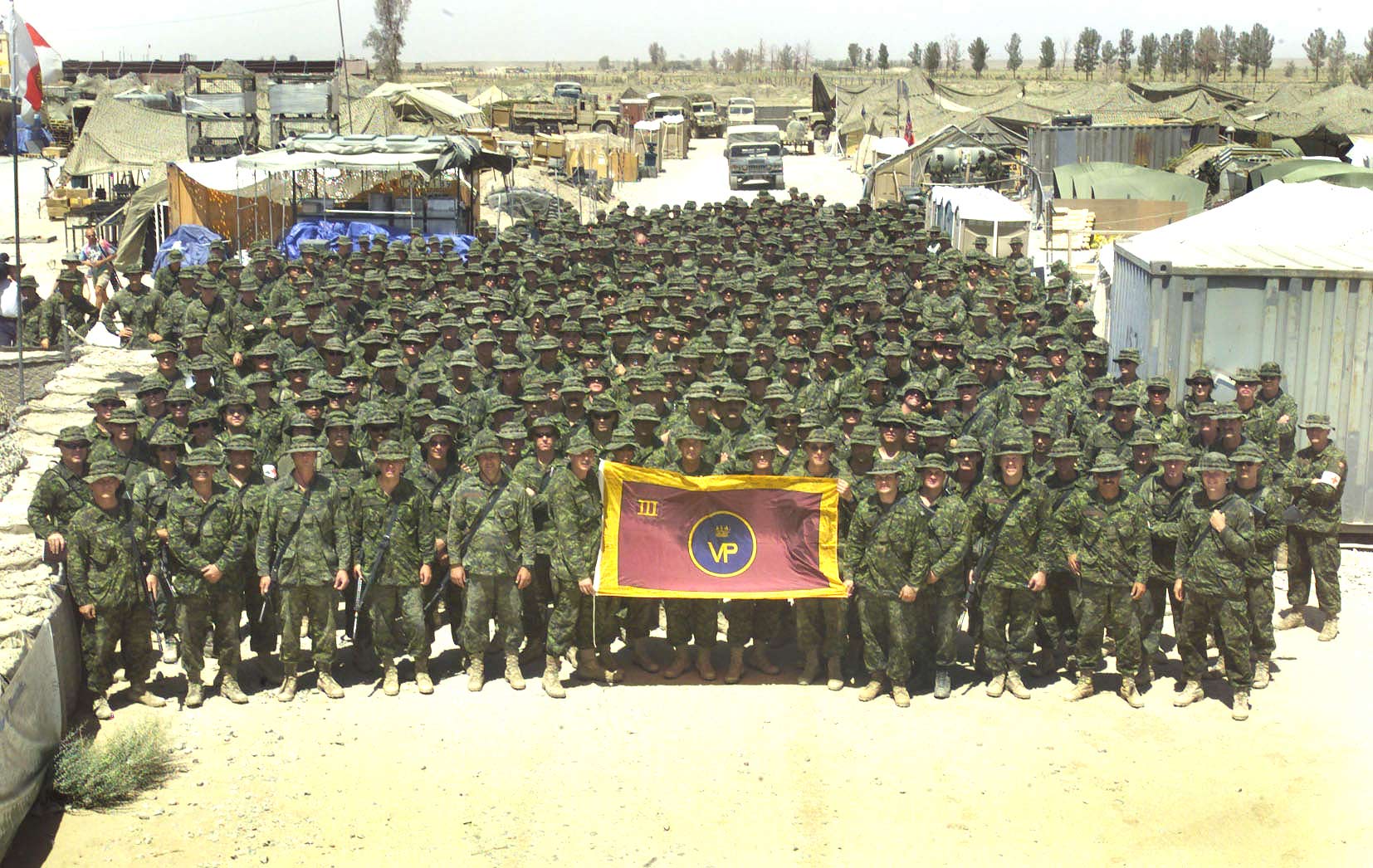 When the Princess Patricia’s Canadian Light Infantry Battle Group was deployed to Afghanistan, an American fighter pilot accidentally dropped a bomb killing four Canadian soldiers and injuring eight others in the “Friendly Fire Incident” or the “Tarnak Farm Incident” of 17 April, 2002. Green set up a website to accept national and international condolences along with putting up hundreds of yellow ribbons in Edmonton on a boulevard on 97th street which helped to create the ‘Yellow Ribbon Route.’

The Patricias members insisted on thanking him, but after staunchly refusing any recognition at all, Green eventually and reluctantly accepted a 3 PPCLI flag signed by the Commanding Officer Colonel Pat Stogran and various soldiers thanking him for his efforts.

He then learned about how a United States Marine Corps flag pulled from the rubble of the Pentagon attack was flown on the Space Shuttle as a way to inspire American Forces. He felt inspired and then contacted the Canadian Space Agency with an offer to release his flag to them to take into space as a way to inspire the Canadian Forces. Canadian Space Agency astronaut Dr. Steve MacLean took the flag into space on STS-115/12A.

As thanks, Green presented MacLean with a painting titled ‘The Stuff of Patricia’s’ and he requested he paint the final brush stroke, which he did at Canadian Space Agency HQ in St. Hubert, Quebec. “Painting with Dr. MacLean was an honour. He radiates intense brilliance.” Green said. “I’m very happy the Patricias have that flag on display at Edmonton Garrison. I can’t run a flag up any higher pole than the International Space Station!” Green proudly said. 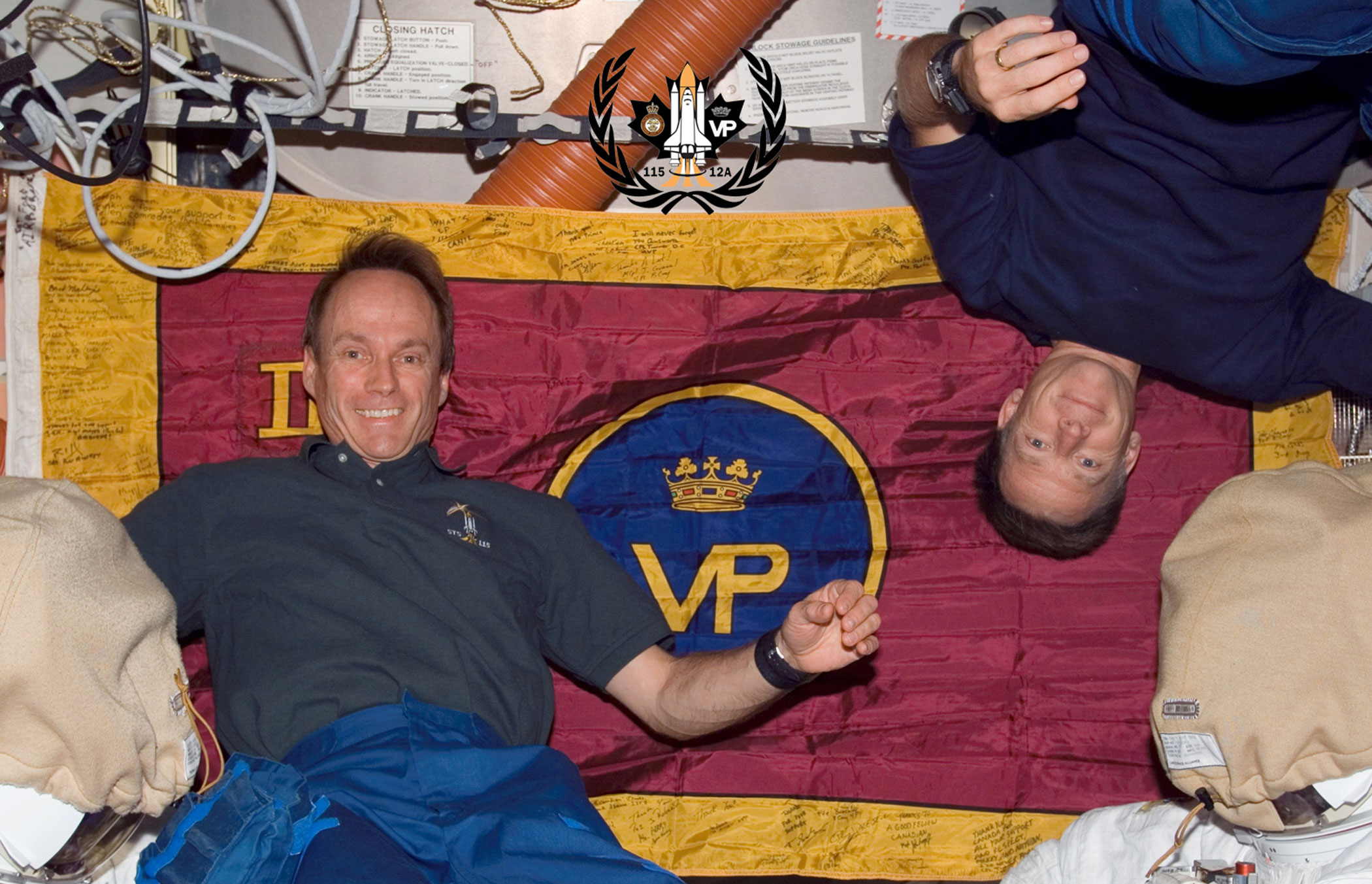 Green has no doubt as to the value Canadians will place on the coins.

“The coin is bearing witness to your life. It will become part of your family history. One day I hope some people will say, ‘Where’s dad’s or grandpa’s Avro Arrow coin, Lancaster Bomber, Spitfire or Hornet coins?’ ”

“I have risked everything on this. I’m all-in. In life, sometimes you have to do that. I am the sole financial backer and I work seven days a week, all day, every day and if I had 50,000 customers committed to buying these coins, you just watch what I do. I won’t compromise on the standards that were seared into me by the Patricia’s. I regard my coins as silver droplets of my soul and as art pieces which will become the financial vehicle to help fund our coin project expansion. In business, so many entrepreneurs compromise, sell out or end up doing things that end up compromising their own integrity. With these coins and our website, we can allow all Canadians to participate and purchase one and support us. I look at this as an investment into me and my dream in exchange for a droplet of silver. I leveraged my design skills in producing high-end bullion coins which have a focus on design quality first rather than being limited by production costs. I don’t care about those, I want magnificent coins, full stop. With the addition of William Woodruff, a retired senior engraver from the Royal Canadian Mint on our team, I’m confident in our vision.” he says. 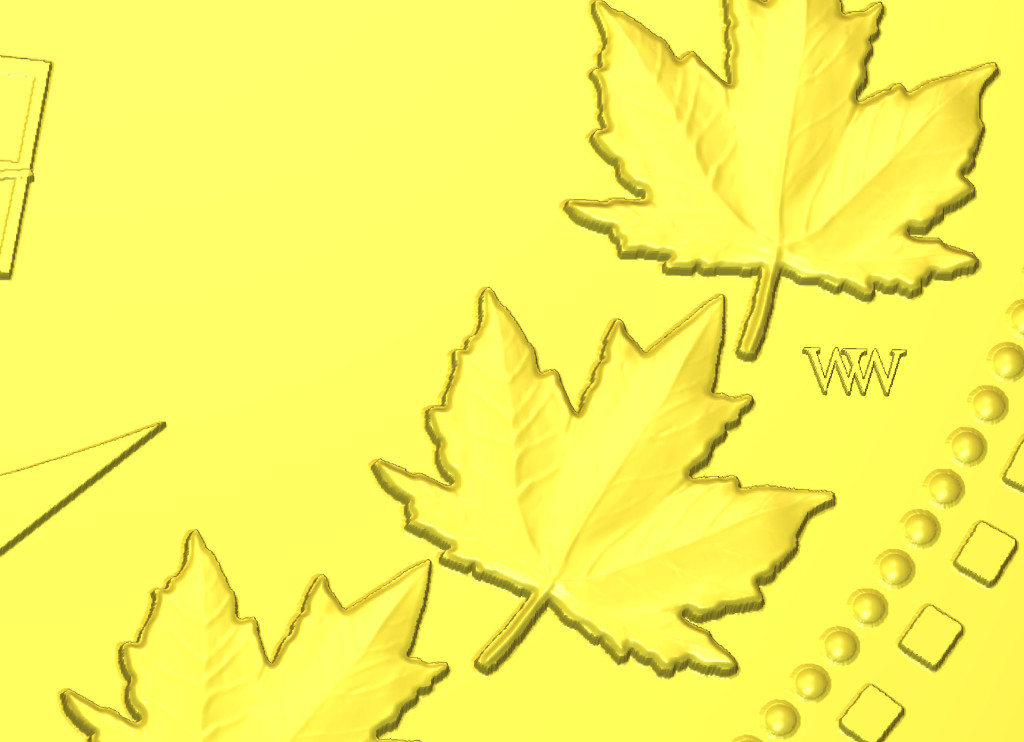 Green was “stunned” by the quality of the first sample Arrow coins he received.

“I was told that most fine silver coins usually only have either select gold plate or colour printing, usually never both and as such, ours are some of the first ever made that feature both. When I heard that, I had a very deep, satisfied feeling that like the Arrow, I helped to established a new standard of excellence that I hope meets Arrow standards. For an artist, there is nothing as powerful as an idea whose time has come.”

Proceeds from the sale of the Arrow and future coins will be reinvested into expanding the catalog and working towards expanding to offer coins that honour the Canadian Army and Royal Canadian Navy. “I already have envisioned coins for the Army and Navy, but one step at a time. Even if we progress one inch a month, in one year, we have made a foot of progress.” 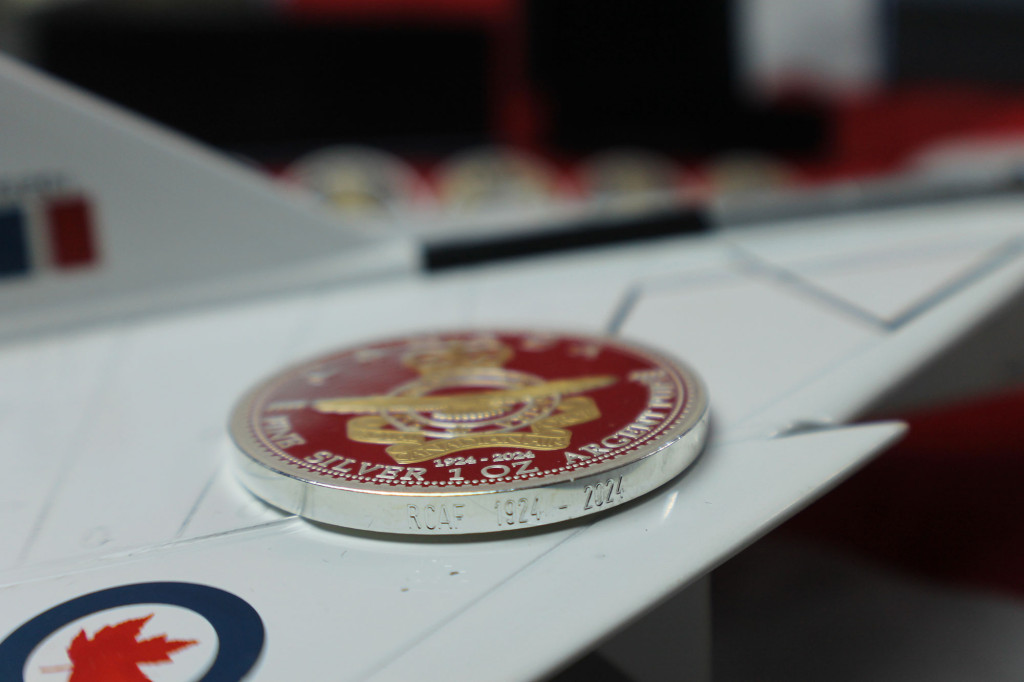 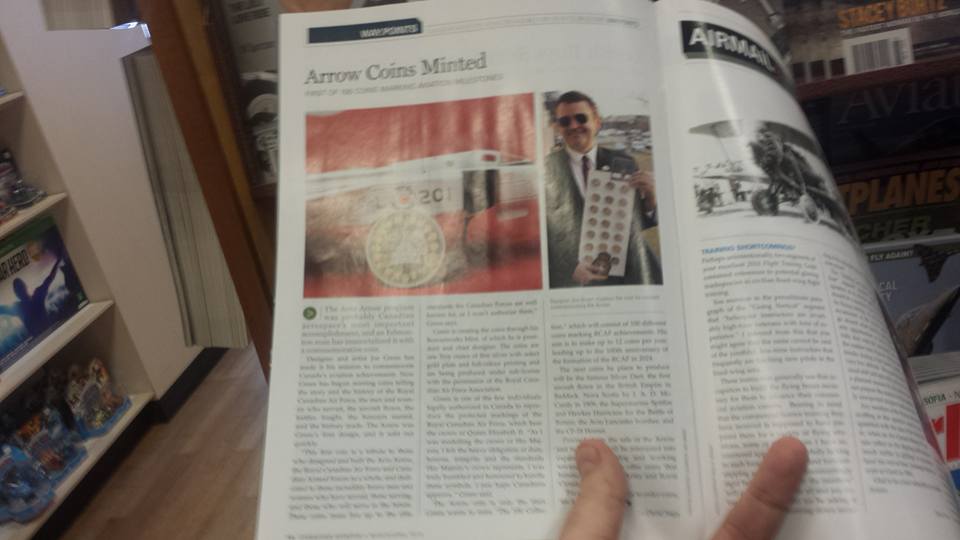 you’ve made with yourself. Thank you to David Nagy and Canadian Aviator Magazine for this very lovely story and your support. I personally appreciate it. -Joe